Shravan purnima's second festival is Raksha Bandhan. This is an ancient tradition. Bhavishya Purana refers to a battle between gods and demons, and Indra (the king of the gods) was feeling depressed. At that time Indra's wife Sachi took a thread, charged it with sacred verses or Mantras for protection and tied it on Indra's hand. Through the strength of this thread Indra conquered his enemies. Since then till today this festival is celebrated.

Through the passage of time festivals are undergoing modifications. Raksha Bandhan is also known as Rakhi. Rakhi has become a sacred festival for sisters and brothers. Sisters tie them to brothers. Priests tie them to people of his congregation. During the middle ages, if a woman tied a Rakhi on the hand of any man, then it became imperative for him, as his religious duty of the highest order, to protect that woman. That man would put his life at stake to protect the honour of that woman.

In those days, many Rajputs sacrificed their lives to protect their spiritual sisters. Humayun received a Rakhi from the queen Karmavati of Chittor and for that, Humayun carried out his sacred brotherly duty and protected her by opposing his own soldiers.

According to ancient traditions, it is customary to have protection threads that are charged with sacred verses (Mantras) and sanctified with rice, durva grass etc.; to have these tied by people who know the Vedas or by near and dear ones. This protection thread saves from sins on the one hand and removes diseases on the other hand. By tying this thread, protection is afforded for a full one year and all kinds of fears are removed.

Nowadays Rakhis are decorated with soft silky threads of various colours, and also with ornaments, pictures, gold and silver threads etc. These Rakhis enhance the artistry of the people. Within these Rakhis reside sacred feelings and well wishes. It is also a great sacred verse of unity. Acting as a symbol of life's advancement and a leading messenger of togetherness. 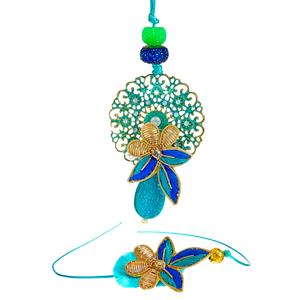 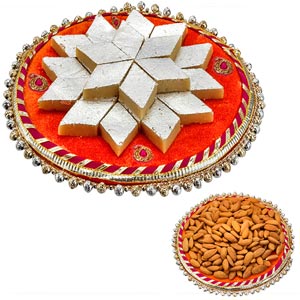